The author of the book of Ecclesiastes writes,

We recently said good-bye to a friend and supporter, Mr. Joe Lewis Whittaker. Joe passed away on March 4, 2014 at the age of 65, which is too young as far as I am concerned. We said hello to Joe and Darlene for the first time in 2006 when we met them at the village of hope in Kitwe, where Nancy and I were working at the time.

Shortly after their visit, the couple agreed to support the development of a new VOH in Chongwe, Zambia. Joe and Darlene had established a foundation called the Reliable Charitable Foundation of Hope for the purpose of caring for orphans and vulnerable children in Africa. 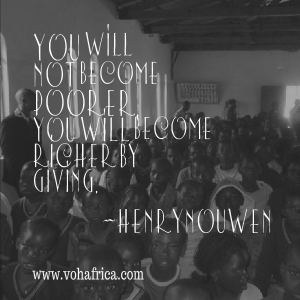 I can say that Joe and Darlene did more than support the work financially; they actually came into fellowship with Village of Hope as they participated with us in the vision and mission of the organization.

They became part of the Village of Hope family.

Though I only really knew Joe for a short period of time, I knew him as a man of deep convictions, one who was committed to God, his family, church and community. Joe had a compassionate heart and was grateful for all he was given in this life. Joe also had a heart for the orphans and vulnerable children of Africa whom he met during his several visits.

Joe was also a very successful businessman, yet one never felt that money was what was important to him; people always came first with Joe. Though Joe was accustomed to being in charge in his business, he always yielded to the experts when it came to the work in Chongwe.

I found it a great pleasure and privilege to work with Joe in the development of the village in Chongwe.

What Henri Nouwen said in the Spirituality of Fundraising rang true in Joe’s life, “You won’t become poorer, you will become richer by giving.” Joe was a very rich man, not because of the money he made but because of his generosity.

Not long after first meeting Joe, it also became obvious that Joe’s passion and love for others was contagious. His wife, Darlene, his daughters and their families all shared in Joe’s passions. This rang true for Joe’s commitment to the orphans and vulnerable children, which was evident when the entire family, children and grandchildren went to Zambia to spend Christmas with the children at the Village of Hope Chongwe.

The children and staff at VOH Chongwe held their own memorial service, led by the local pastor in memory of “Uncle Joe”. He will long be remembered by them all as a man who cared about them, before they had ever even met!

The writer of Ecclesiastes wrote, “I know that there is nothing better for them than to rejoice and to do good in one’s lifetime.” Joe did both very well, he rejoiced and did good.

As I look back on Joe’s legacy I count it a privilege to have known him and am thankful for the opportunities that we all have to make a difference in the lives of others in whatever way God has gifted us.

I will miss Joe, as many will, for he was a good man, an encourager, a friend and role model. Though saying good-bye was a sad thing, I thank God for the hello of 2006.

“You won’t become poorer, you will become richer by giving.” -Henry Nouwen