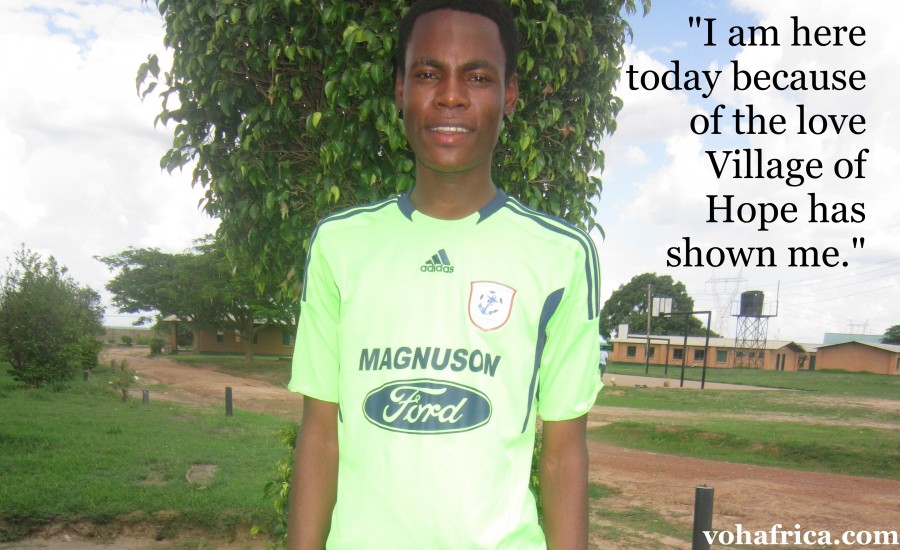 Where are they Now: Kelvin 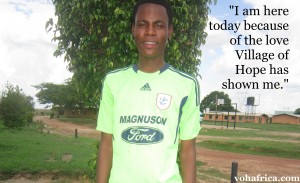 Before coming to Village of Hope I was living in Kalulushi with Mom and Dad, and my three brothers. My dad was working on our small farm plot to provide for all of us.

In 2003 my father started to get very sick with an illness and later died. After dad died, mom struggled to provide for us. I was taken to live with my uncle at the Kanfinsa police camp, but it was not long before that uncle died and I was brought back to live with my mother.

My grandfather brought all four of us to live with him in Kitwe in 2003. We started living with our grandfather. Just one year later, in 2004, our grandfather who was quite elderly started getting weak and unable to care for us and so he decided to bring us to Village of Hope. Even though he was a Muslim and he knew that Village of Hope is a Christian place, he had heard many good things about them and so he decided to take us to live there and to give us the chance to continue with our education.

Looking back at that now I have understood that everything works according to God’s plan because the Bible says in Jeremiah 29, “I know the plans that I have for you, plans to prosper you and not to harm you, plans to give you hope and a future.”

What are you doing now?

Last year I completed writing all of my grade twelve exams and I really would like to work in the mines in the future, but they will not hire anyone who does not have a certificate of health.

I began saving money so I could afford to go through the required testing and receive this certificate. I am very happy that thanks to various small jobs and some assistance from relatives, I have recently managed to get the health certificate, so that when I am ready, it will be easier for me to get a job in the mines.

My elder brother who also grew up at VOH Kitwe, was one of the ones who helped me to pay for the heath examination.

What are your plans for the future?

My plan is to go to a driving school so I can get my license to drive a truck. Then, with my health certificate already in place, I am hoping to get a job as a driver at the mines, or some other company in town. I will then begin to save the money that I earn driving the truck for college fees.

My long term goal is to train as an electrical/mechanical worker.

How has Village of Hope helped get you where you are today and become the person you are?

Village of Hope is home to me and I can’t forget all they have done for me.

I am here today because of the love Village of Hope has shown me.

Village of Hope has also made me be a Christ follower and given me hope for the future.

“I am here today because of the love Village of Hope has shown me.” #vohafrica

Category: Where Are they Now? Tags: africa, childcare, missions, nonprofit, profile stories, voh kitwe, where are they now